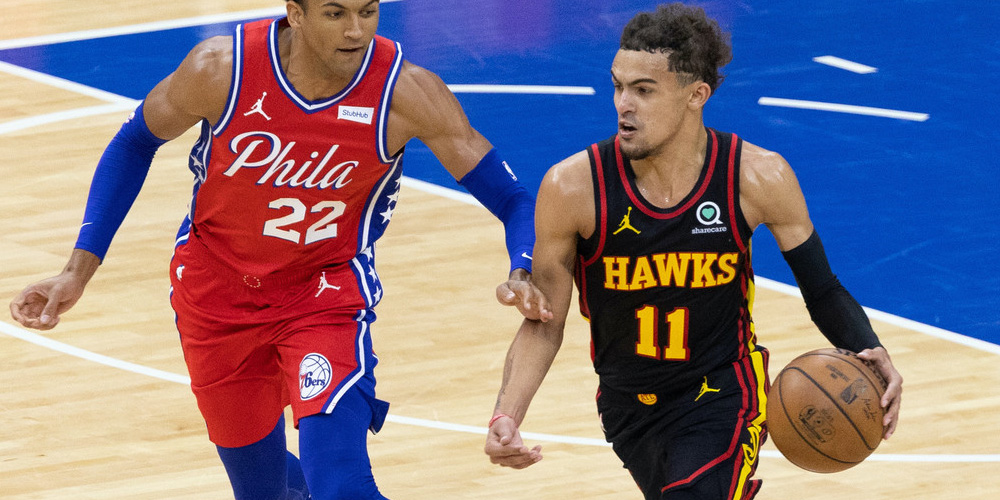 Betting the NBA Playoffs for Tuesday

The first round is behind us and we’re on to the conference semifinals in the NBA. We have two games to bet on Tuesday night, Game 2 of the Hawks-Sixers series and Game 1 between the Clippers and Jazz.

Here’s your guide to betting the NBA playoffs for Tuesday, June 8.

The Hawks took Game 1 in Philadelphia, with a final score of 128-124. The final score was a lot closer than the game actually was, with Atlanta dominating the Sixers throughout. The over hit in Game 1, by a significant margin, and the Hawks of course covered the spread as underdogs.

Game 2 tips off at 7:30 PM EST on Tuesday, and the Hawks find themselves as the underdog once again, at +5. The over/under is set at 223 points.

The biggest question mark heading into the series was the health of Joel Embiid, who did not finish out the first round. His slightly torn meniscus did not keep him out of the series as some thought. Embiid logged 39 points and nine rebounds in 38 minutes of play.

This series is far more even than some thought it would be. The Hawks have a strong balance on both ends of the floor. One way to equate offensive and defensive rankings is to consolidate points per game, effective field goal percentage and efficiency. When bringing those metrics in, Atlanta finds itself with an 11th-ranked offense and a tenth-ranked defense.

Only a handful of teams have that sort of consistency, and it’s one of the biggest reasons Atlanta won Game 1.

The Sixers offense is middling, ranked 15th, but they have the edge defensively with the fourth-ranked defense. The quality defense didn’t show up in Game 1, and there’s reason to think the Sixers will similarly struggle moving forward. Trae Young has had a coming-out party this postseason. Young dropped 35 in Game 1 and averaged nearly 30 points per game against the top defense in the NBA, the Knicks, in Round 1.

Philadelphia was one of the best teams in the NBA all season, earning the top seed in the Eastern Conference. For Philly to even the series, it starts with slowing down Young. Doc Rivers tasked Danny Green with slowing down the guard in Game 1, to no avail.  If Ben Simmons moves to cover Young, it may turn the series - as the 6’10’’ point guard is one of the top defenders in the league.

Still, five points is a large spread for a team that so thoroughly dominated Philly in the opening game. The best bet here is to take Atlanta and the +5 spread. Consider betting the over, at a modest 223.

One of the most anticipated matchups of the playoffs is coming to fruition in the Western semis. The star-studded Clippers are coming off a massive Game 7 win over Luka Doncic and the Mavericks and now head to Utah.

The Jazz were the NBA’s best team all season, the top-seed in a loaded Western Conference.

There aren’t many teams that can boast the elite balance the Jazz have displayed on both ends all season. Utah’s offense is third overall, and their defense is an equally ranked third in the NBA.

We mentioned above that not many teams can go toe-to-toe with Utah in the rankings. The Clippers are one of those teams. Overall, their offense and defense are both ranked fifth in the NBA. This is likely one of the best series we’ll get in these playoffs. During the regular season, the Jazz took two of the three games. We’ll be betting on Utah to get another one in the series’ first game. The Clippers are coming off a seven-game series, while the Jazz disposed of the Grizzlies in just five games. Rested and healthy, Utah seems to be in a good spot to get a win here.

Whether or not you want to bet the over depends on your preference for offense or defense. Both units are equally strong, so which will reign supreme? Utah hit their over in all five games in Round 1, so consider betting on that trend to continue.

Don’t be surprised if this series goes 7 games, consider betting over 5.5 games played at -200 odds. The Jazz are -125 favorites to win the series, while the Clippers are +105 to win. Our preferred team is Utah, and it starts Tuesday night with a win, covering the -4 spread.