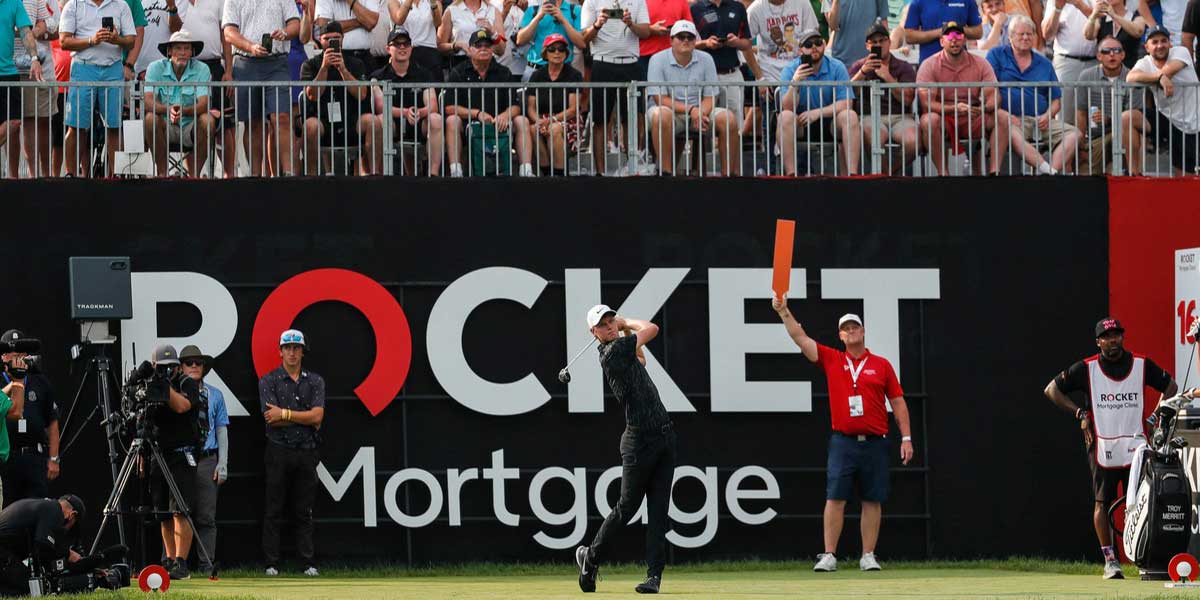 The PGA Tour moves from the state of Minnesota to Detroit, Michigan, for the fourth edition of the Rocket Mortgage Classic. We have a full 156-player field going this week, and the top 65 golfers plus ties after round 2 will move on to play the weekend rounds.

There's $8.4M on the line this week, the winner receives $1.512M plus also tallies 500 FedEx Cup points. Detroit Golf Club is 7,330 yards in length, is a par 72, and the greens are a combination of bentgrass and poa annua. The average winning score at this event from 2019 to 2021 is -22, so expect lots of eagles and birdies this week on this relatively easy course. Place bets on golfers who are solid with the flat stick, strong off the tee, hit a long ball from the tee blocks, sound tee to green, and have a respectable approach game.

Three questions I have regarding the Rocket Mortgage Classic this week:

Patrick Cantlay (+800) - The top golfer in the field won last week that being Tony Finau, and the top golfer this week could very well win at that Patrick Cantlay. He has five top 8's over his last eight starts if you count the Zurich Classic, and two other top 14's during that stretch. You can bet Cantlay to win, to finish top 5, top 10, and top 20, and likely win money in most or all of those wagers this week, especially if his unreal putting continues.

Cameron Young (+1800) - He looks so determined to win when you watch him play, and his time is coming, so I'd advise betting him every week he plays. He has a ridiculous four top 3's over his last seven starts - one of those was a T2 and he's coming off a 2nd at The Open Championship where every part of his game was outstanding. Much the same as Cantlay above, you can bet Young as aggressively as you'd like to this week.

Avoid: Tony Finau (+1400) - He's coming off the big win last week at the 3M Open, so you may want to tread carefully this week with him as he could regress. I still think he will do decent in Detroit, but I think he won't finish inside the top 10 and even a top 20 finish may be a stretch.

Cameron Davis (+3500) - The defending champ has flashed some solid form lately with a T8-6th-T16 over his last three starts and his ball-striking has led the way each time. I doubt he will win this week, but a top 10 is very doable and that's how I'm betting him this week.

Denny McCarthy (+3500) - The putting specialist is racking up top 7's with three in his last four starts, and he has gained over 11 strokes ball-striking between his most recent start and three starts ago at the U.S. Open where he finished 7th. I like him as a top 10 and/or a top 20 bet this week.

Avoid: Matt Kuchar (+5000) - Kuchar hasn't finished top 10 since April and has sort of settled into the 30's and 40's for finishes more recently. He's mostly relying on his short game at this stage in his career which severely limits his upside. You could do a top 40 bet on him this week, but the risk and reward aren't that appetizing in my mind.

Alex Smalley (+8000) - He has three top 10's this year so far, and three other top 27's over his last six starts including his T10 at the Scottish Open in his most recent competition. His ball-striking looks great and his around the green play is pretty good also, so I would recommend placing a top 20 bet on Smalley this week, or head into top 10 territory as well if you smell another top 10 coming his way.

Taylor Pendrith (+6000) - Pendrith has been quietly putting up great results with three straight top 13's and four top 25's in his last five starts, and his stats look quite solid during this span. I can fully endorse a top 20 bet on Taylor this week.

Avoid: Russell Henley (+5500) - He's known as a great ball-striker but he hasn't been very good in this stat category over his last three starts with a cut, a 60th, and a T62 during that stretch, and he has lost strokes putting in five straight tournaments - not a good sign since putting is really important on this course. He also missed the cut here in 2019 in his only look at this event, and while I don't think he will miss the cut this week, he could be heading for another 60-something finish and there's no betting value in that result.

Michael Gligic (+13000) - Gligic has five straight top 40's so he's a good bet to make to finish top 40 again this week, or you could even bet him to finish top 20 since he has two of those in his last five starts including a T10 at the John Deere Classic. His ball-striking and putting are on point, so ride him while he's hot.

Chesson Hadley (+18000) - It's not very often that a player down in this range has three top 10's in his last five starts, but Hadley does and you should take advantage. Betting him to finish top 10 is still risky, but a top 20, top 30, or a top 40 wager are all doable.

Avoid: Zach Johnson (+30000) - Johnson has five missed cuts and a withdrawal over his last eight starts and it's because he's not really doing anything well these days except for around the green play, but that will only get you so far on the PGA Tour. If you can find a place to bet him to miss the cut, then go for it, but otherwise you can't profit off of ZJ anymore.